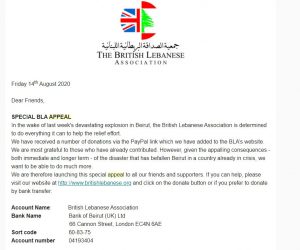 A Message from the Chairman of the BLA

In common with so many other organisations, the British Lebanese Association has had to face a difficult 15 months in which we have been unable to meet or hold our usual programme of events. Nevertheless, we have not been inactive and I am pleased to say that the BLA has continued to make an important contribution. Following the appalling explosion in Beirut last August, we organised an appeal which raised $30,000 all of which has been donated to charities in Beirut. This included the special “For the Love of Lebanon” event which we organised at Bicester Village in October. We are most grateful to our members and supporters for their exceptional generosity. The BLA also played an important role in the “Stand Together Lebanon” initiative, alongside the Lebanese Embassy and LIFE, to help Lebanese students stranded in the UK and facing serious financial difficulties because of the coronavirus pandemic and the ban on overseas transfers from Lebanese banks.

Despite the impossibility of arranging any physical meetings, we partnered with the South Social Film Festival for an online screening of Danielle Arbid’s film “Parisienne” last June. Our Annual General Meeting, which had also been scheduled for June, was finally held by Zoom in November. This allowed us to agree some important amendments to the BLA’s Articles of Association to reflect the changes that have taken place in the running of the BLA since it was founded in 1984 and to broaden the range of charities to which we can donate.

Inevitably, the pandemic has had serious consequences for the BLA. We were unable to hold the major fund-raising event which we had been planning for 2020. This has left our finances in a much weaker position that we would wish. We have, for example, been able to sponsor only one scholarship student this year in partnership with our old friends at the Said Foundation and are unlikely to be able to sponsor any students in the next academic year starting in September.

Now, however, as the vaccination programme ramps up and the outlook begins to appear much brighter, we look forward to re-launching the BLA’s activities. At a time when Lebanon itself is suffering so cruelly, with your help we are determined to do all we can to try to relieve that suffering, to ensure that in this present crisis the richness and diversity of Lebanon’s extraordinary cultural and artistic achievements are not forgotten, and to continue to work to strengthen the many ties between Britain and Lebanon. As always, we welcome your ideas and suggestions.

I look forward to seeing you again before too long.

A Message from the British Lebanese Association

The British Lebanese Association is deeply concerned about what is happening in Lebanon. In 35 years, we have not seen a crisis as grave as the one that the country is now facing. The dire economic situation has created unprecedented levels of poverty and suffering. The BLA has limited resources but we are determined to do all we can to help. We have therefore made donations of $10,000 each to seven charities - Arcenciel, Beit el Baraka, Embrace, SOS Villages D'Enfants, Lebanese Food Bank, Oum el Nour and Teach a Child - that are non-sectarian and cover the different communities.

We know that there are many more worthy charities that we would like to be able to support. We welcome any donations from our friends and members via our website, and please feel free to suggest charities to which the BLA might contribute. We are extremely grateful for your continued generosity and support. None of this would be possible without you.<

Welcome to the BLA

The British Lebanese Association was established in 1984 to encourage friendship and understanding between the people of Great Britain and Lebanon and to advance and encourage cultural development between the two countries.

Today the British Lebanese Association is the most prominent organisation of its type. Our twin aims are to offer our members the opportunity to meet at and enjoy our programme of events and to demonstrate up to the very highest level the determination of our two nations to maintain and to develop vital and important links. Read More

The British Lebanese Association was pleased to present Guy Manoukian, featuring the music of Dana Al Fardan, performed by artists from The Peace and Prosperity Trust.

Gala Dinner 2018 at the Dorchester Hotel in conversation with Baria Alamuddin.

On 10th November 2015 Paul Khawaja delivered a lecture on one of Lebanon's less known but perhaps in the light of the country's present condition, its most important heritage site: The Lebanon Mountain Trail.

The Art of Lebanon

The 25th Anniversary of the British Lebanese Association. The Al Mahabba Exhibition of Paintings.

Details of the 'Stand Together Lebanon' Initiative